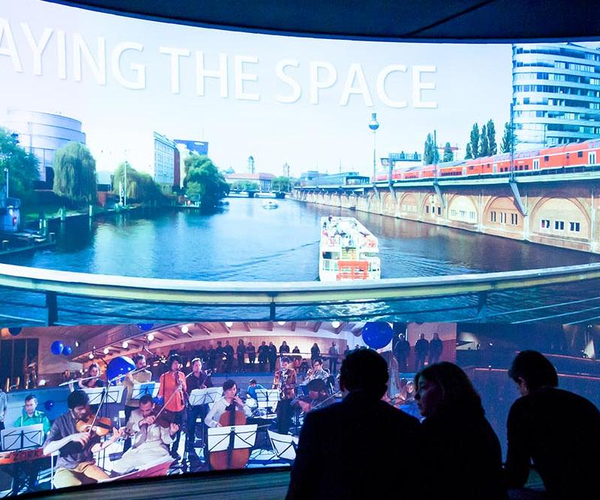 A duet between Fraunhofer Heinrich Hertz Institute (HHI) and Avant Première!
This collaboration brings together research in media technology and creative content design. Avant Première and HHI are working together to uncover potential uses of the TiME Lab technology - one-of-a-kind methods for recording, transmitting and replaying music while setting new standards in both quality and experience. Visitors of Avant Première have the chance to plunge into the immersive media world of the "mobile TiME Lab" and experience the possibilities for themselves

TiME Lab – Tomorrow's immersive Media Experience Lab
Engineered by the Fraunhofer Heinrich Hertz Institute, the TiME Lab offers a unique and unrivalled blend of 3D panoramic projection in 7K resolution. The 180° panoramic projection takes in the whole field of human vision while an outstanding audio system offers an unparalleled feeling of immersion. All creative industries are invited to explore new, innovative content and applications together with the TiME Lab system.

The Premiere – Berlin’s famous music in a new cooperation:
For the opening day, TiME Lab proudly presents the world premiere of the first music documentary film shot in 180°: PLAYING THE SPACE. Together with its partners, i.e. Berliner Philharmoniker and the Radio Choir Berlin, this project presents a new idea of space. In this context, music truly touches people; it’s an atmospheric experience!

Creating Space in Video and Audio
The workshop, for and in cooperation with Berlinale Talents, addresses challenges and technical procedures of translating live performance into high quality panoramic projection and 3D audio. It will explore practical details using real-life examples from PLAYING THE SPACE.

In the context of the education program of the Berlin Philharmonics, the internationally acclaimed choreographer Sasha Waltz staged the Carmen Suite by Rodion Schtschedrin after Georges Bizet?s opera „Carmen“. 120 pupils of ?ve different high schools from Berlin rehearsed the modern dance for eight weeks in the Arena Berlin in Treptow, in order to perform it for three nights with the Berlin Philharmonics, directed by Sir Simon Rattle. The Fraunhofer Institute seized the opportunity to capture the production with the brand new 180- Degree-Omnicam. This special mirror rig was built to capture panoramic scenes in the highest quality, distortion-free and without displacement of the parallax. For the first time, the 180-Degree-Omnicam Rig was set up with six ARRI Alexa-Ms. The signal streams were recorded onto three VENICE devices by DVS Digital Video Systems GmbH, resulting in a 6K horizontal resolution per stitched frame! The complete shoot, including extensive postproduction, was executed by KUK Filmproduktion GmbH of Munich, directed by Josef Kluger, experienced through numerous other panorama shoots. The technical supply was made available through ARRI Munich and DVS Digital Video Systems GmbH. The project was also supported by the EU funded research project FascinatE (Format Agnostic SCript-based INterAcTive H15 Experience), which will evaluate the results.

Second screen applications are a noticeable new trend. The usage of smart phones, tablets and laptops while watching TV becomes more and more part of the media consumption. Fraunhofer HHI implemented a second screen usage scenario that changes the way people views concert or sport events online by giving them the ability to control how they view the show. Beyond already known solutions using multiple single cameras, Interactive Panoramic Streaming allows the fans to feel like they were at the show by having access to the whole 360 degree scene captured with an omni-directional camera system. This second screen application allows users to navigate in the UHD scene, selecting a region of interest and zooming into this region and provides fans with unparalleled access to their favourite artists or athletes.

Together with the Radiochoir Berlin, Jochen Sandig and David Haneke plan to use HHI's immersive Media technologies for creating a new approach to documentary music film and audiovisual installation.


TiME Lab Screenings
The New Experience of space in 180°

Whether it is the education programme of the Berliner Philharmoniker, the Concert of Jon Bon Jovi in Brisbane, Australia or the mystical world of LICHTMOND – TiME Lab is a new concept that gives music another dimension.