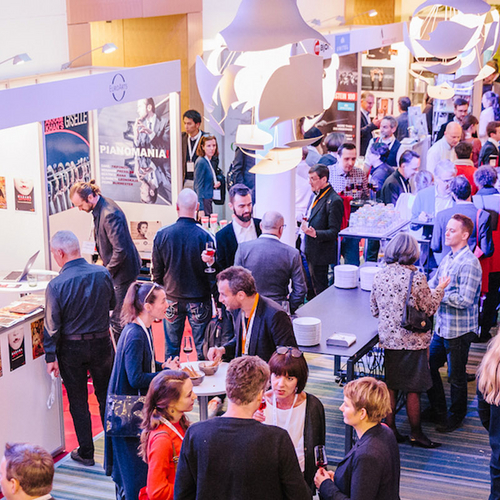 These General Terms and Conditions (GTC) as amended from time to time shall apply to all current and future contractual relationships arising out of the registration for and participation at the Avant Première, even if they are not expressly referred to in a specific case. The GTC version applicable at the time of conclusion of a contract shall be relevant. Any deviating, conflicting or supplementary GTC shall become no part of the Agreement, even if they are known. IMZ hereby expressly objects to GTC of the customer. The customer shall be informed about amendments to the GTC; they shall be deemed agreed unless the customer objects to the amended GTC in writing within 14 days; in the notification the customer will be expressly informed about the consequence of silence on his part.

Every breach of the conditions of participation as well as any disregard for security regulations can result in the termination of the respective contract (e.g. withdrawal of registration, the rejection of submitted film material for screening et al.) and immediate exclusion from all events by the IMZ. The IMZ reserves the right to assert additional rights.

2.1. Registration deadlines are published on the Avant Première website (www.avant-premiere.net). The IMZ reserves the right to accept or reject a registration and will in this instance give notice to the registering party (company or individual).
2.2. Validity of Registration
A registration is only valid if submitted via the online registration form on the Avant Première website or done directly on location and after payment confirmation through the IMZ. A registration is linked to the registered persons and is non-transferable to other individuals. A confirmed registration allows access to all Avant Première Screenings as well as to conference programmes and events, except for programme items requiring an additional registration and subsequent confirmation by the IMZ as set forth on the Avant Première website (e.g. One-on-One Expert Session et al.).
2.3. Badges + Tickets
Walk-up tickets and badges as well as badges and tickets due to pre-registration will be available at the entrance to Avant Première at Hotel Scandic Berlin Potsdamer Platz, Gabriele-Tergit-Promenade 19, 10963 Berlin, Germany from Sunday 23 February 2020, 9:00 AM. Badges and tickets will be handed out upon presentation of valid personal identification and confirmation of registration.
Any company or person with outstanding debts towards the IMZ will be refused registration and access to Avant Première until debts are settled.
2.4. Loss + Replacement
Over the entire duration of Avant Première, a badge or ticket is required to access the event areas. Security/IMZ personnel can refuse access to persons without ticket or badge. Tickets or badges used by persons other than the registration holder will be confiscated. Loss or theft of tickets and badges must be reported to the IMZ staff. The issuance of a new ticket or badge may result in additional costs. The IMZ reserves the right to deny issuance of a replacement ticket or badge. Day Passes are non-replaceable.
2.5. Payment + Cancellation
After the online registration is submitted, participants will receive a summary of the registration details including the gross amount to be paid. Confirmation, invoice and additional information will be sent by the IMZ within a maximum of 14 days after submission.
Any payment prior to the event is accepted only via bank transfer or credit card. Expenses and transaction fees are to be paid by the submitter. On-site payment is possible in cash or by credit card (with no extra fees). Invoices are to be paid upon receipt within a maximum of 14 days. A registration is valid only after the IMZ has confirmed receipt of payment.
Cancellation: So as to be considered valid issuing a refund, the IMZ must receive notification of cancellation of an Avant Première registration in writing within 3 weeks after the receipt of the invoice and no later than 20 January 2020. No refunds will be made after receipt of cancellation later than 20 January 2020. Refunds are subject to a 20% administrative charge.
Day passes, student passes and special EFM/Avant Première combination tickets are non-refundable.
2.6. Prices + Tax
Rates and tickets indicated on the Avant Première website and the online registration form refer to net amounts excluding all applicable taxes. Registration is taxed 7% VAT, reverse charge is not applicable. Tax amounts are indicated whenever prices are stated. No further costs occur beyond the total gross amount shown in the summary of the registration and subsequently sent invoice. Accommodation costs are not included. In case of governmental tax changes or the charge of new or additional taxes and fees which are unknown to the parties at this time, the IMZ reserves the right to adjust the listed rates and prices accordingly.
2.7. Hotel + Accommodation
Information and booking service for hotel accommodation is communicated on the Avant Première website. Contents, availabilities and the execution of the booking process is provided by Visit Berlin and Hotel Scandic Berlin Potsdamer Platz or respective other service providers, which are in charge of the information and booking or cancellation procedures. The link to Visit Berlin is to be found on the Avant Première website. Avant Première participants will be charged directly by the hotel and not the IMZ. Questions and complaints concerning the booking procedure or service and accommodation on site are to be directed to the hotel only and will not be administered by the IMZ.

Payment policy
Payment is due within 14 days upon receipt of the invoice.

The IMZ collects data provided by participants during the registration as well as the submission process on the Avant Première website. Personal data is processed only in accordance with the General Data Protection Regulations (GDPR) and as stated in the IMZ’s Privacy Policy.

All trademarks displayed on the Avant Première website are subject to the conditions of the copyright and trademark rights of the registered owner. Simply being listed on IMZ websites should not lead to the conclusion that third-party rights do not protect these trademarks. The same applies to content provided by third parties such as videos or trailers. Despite careful control of the content, the IMZ team is not liable for the content of external links. The owners of external sites are responsible for the content of the linked websites.


6. PROHIBITION OF FILM AND SOUND RECORDINGS AT AVANT PREMIÈRE SCREENINGS BY PARTICIPANTS

Film and sound recordings of any kind made by Avant Première participants at film screenings as part of Avant Première are not permitted. Any infringement can lead to civil and criminal legal action and can result in the exclusion from the event. Film, digital, video or sound recordings that contain any content of a film screening as well as the recording device can be confiscated. The devices can be returned on the condition that the owner agrees to delete the recordings beforehand. In light of the necessity to protect from piracy, every participant ensures that he or she will not steal intellectual property, in accordance with copyright laws and with respect to the resulting rights.

The IMZ cannot be held liable in case of war, terroristic attacks, mobilisation, strike, lock-out, fire, regulations of the authorities or other circumstances beyond the control of the IMZ (force majeur, that might render it impossible or difficult to carry through the contractual obligations by the IMZ. In case of the contracting party (e.g. registered person, film submitter, booth contractor, special screening presenter et al.) being prevented to enjoy the services of the IMZ as contracted due to force majeur,
- the contracting party will still have to meet its contractual obligation to settle the full amount, or
- in case the respective invoice was already settled, the IMZ is not obliged to refund the transferred amount.

8.1 For contracts for consideration IMZ assume warranty in accordance with the statutory provisions.
8.2 For services provided by IMZ for no consideration there shall be no warranty obligation.
8.3 Liability of IMZ and their bodies, officers, employees, contractors or other agents ("people") shall as to the merits be limited to willful intent or gross negligence; liability for slight negligence shall be excluded. This exclusion of liability shall not apply to personal injury or damage to property which IMZ has taken over. To the extent that liability is excluded or limited this shall also apply to personal liability of its people.

9.1 If any provision of this Agreement is or becomes ineffective in whole or in part or if a gap is noticed in this Agreement, the validity of the other provisions shall not be affected thereby.
9.2. Modifications of or amendments to this Agreement as well as statements to be willing to conclude contracts shall be made in writing. This shall also apply to an abolishment of the formal requirement of written form. Signed statements or declarations sent by email (e.g. PDF scans) or fax shall be deemed to meet the requirement of written form.