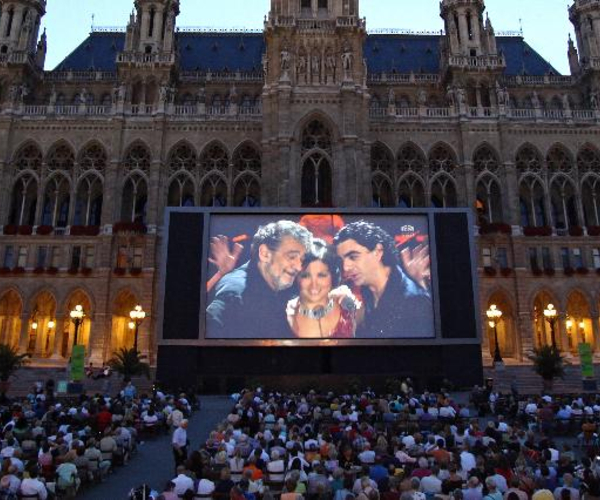 Since 1991 the music film festivals organized by the IMZ have been sustaining a global dialogue, promoting the performing arts across cities, countries and cultures. They are a unique and versatile concept – attracting hundreds of thousands of visitors of all ages. Having travelled successfully all-over Europe to 25 Cities and as far as Japan, USA or Brazil they inspired broad local audiences with the magic and excitement of music, opera and dance. Realizing the idea of low-threshold to culture for everyone with free access screenings of music, opera and dance film productions (classical and world music, jazz, pop, ballet and contemporary dance) over a period of time, they can take place outside at city squares, beaches, castles as well as indoor in theatres, historic buildings, universities and schools et al.

One of the most renowned examples is the Film Festival at Wiener Rathausplatz, taking place since 1990 and with more than 860.000 annual visitors the largest festival of its kind worldwide, for which the IMZ curates and provides the whole programme. In the past as well as today the IMZ also co-operates with other international partners like the Vienna Music Film Festival in Yekaterinburg, New York, Buenos Aires and Barcelona and many more.

The programme of these music film festivals is curated by the Vienna based IMZ International Music + Media Centre. The IMZ is the international business network dedicated to the promotion of the performing arts through audio-visual media and draws on over 25 years of experience in organizing, producing and curating customised programmes for music film festivals with hundreds of thousands of visitors worldwide.

Our music film festivals are being booked as a programme-highlight by cities, cultural capitals, music festivals, opera and dance houses, embassies, educational institutions, academies and any cultural institutions and initiatives interested in performing arts. Owning an extensive archive, film database and gathering a large international network of renowned film production and distribution companies, concert halls and opera houses, the IMZ is the ideal partner for supplying the complete film programme as well as marketing and PR material. The customised film programme could contain an potpourri of different music and dance productions as well as special programmes on the occasion of anniversaries like Beethovenjahr 2020.

Most often taking place in public and highly frequented venues in a relaxed atmosphere, music film festivals build bridges trough the arts. While designed to satisfy lovers of classical music, opera, pop music, dance or documentaries, they constantly strive to inspire those who are new to the performing arts or concert halls. Very often the customised film programme contains well-known musical performances with a recognition value (for example from Carmen and The Magic Flute), in order to make it easier for less knowledgeable people to enjoy the genre for the first time.

The IMZ International Music + Media Centre, founded under the aegis of UNESCO in 1961, is a professional umbrella institution which preserves performing arts as a cultural asset. Our 150 member organisations from 30 countries are renowned major production and distribution companies, public or private broadcasters, opera houses, educational institutions, record labels as well as individuals as producers, directors, scriptwriters, musicians and dancers. We are the professionals` platform providing customised service and expertise for business. Besides international music film festivals the IMZ hosts Avant Première Music + Media Market Berlin, the world`s largest trade fair for performing arts films, as well as the Austrian semi-final judging for the International Emmy® Awards.