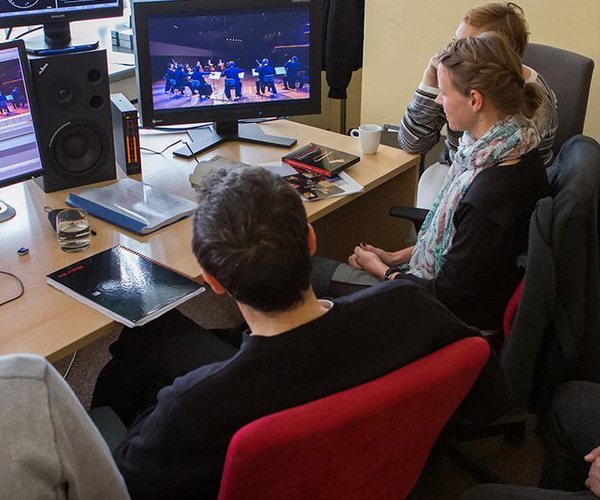 In 2013 the IMZ held the 1st edition of the IMZ Academy, a highly practical, immersive and detailed master class in the multi-camera capture of classical music for television supported by Czech Television, ITF Golden Prague and Czekaj Artistic Productions. The primary focus of the workshop lay in facilitating intensive exchange with renowned experts in the field of directing and the visualisation of music in general. Furthermore the Academy concentrated on the editorial, scheduling, financial and cultural context in which programming is made.
As a sequence of workshops the IMZ Academy consisted of two days of intensive re-editing sessions on three specific programmes brought and presented by the participants as well as a programme provided by the Academy director himself, followed by an open feedback session. 11 participants – ranging from students and young professionals to well-experienced experts – worked together in teams under the directorship of Peter Maniura and the editing eyes of Andy Barker, both having years of experience within BBC Television!

The Academy offered customised advise on the production of arts programming and provided space for the discussion of important and down-to-earth questions for arts productions. Thanks to Czech Television the participants enjoyed excellent working facilities within the CT buildings available!

The workshop was followed by a joint EBU-IMZ panel discussion within which the results of the workshops were presented to the public and further questions about the high art of producing interesting arts programmes were addressed. Thanks to Arild Erikstad (NRK, Norway), Robert Kamyk (Telewizja Polska, Poland), Henk van der Meulen (Royal Conservatoire of The Hague, The Netherlands) and Martin Traxl (ORF, Austria) for participating in the thought-provoking panel hosted by Peter Maniura.